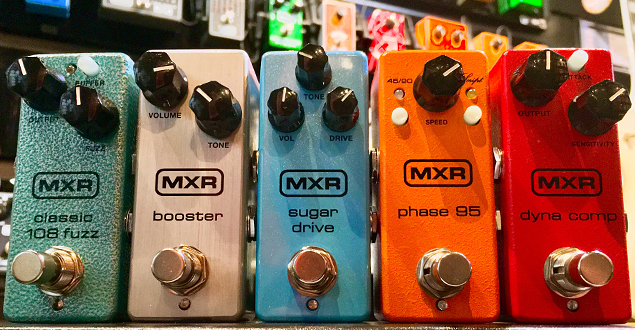 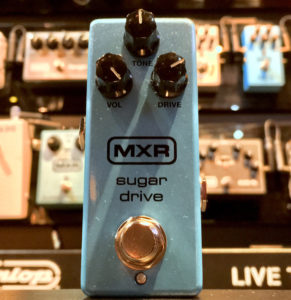 New to the MXR pedal range, the Sugar Drive delivers mythological guitar tones in a pedalboard-friendly sized box. From sauced up boosting to blown-tube distortion, the MXR Sugar Drive gives a diverse range of clear and transparent overdrive tones.

In addition to Volume and Tone controls, a staple of any good drive pedal, the distinguishing elements of this pedal’s circuitry are the dynamic range of the Drive control and an internal voltage doubler. Not only does the Drive control increase the ferocity of the gain, but as you rotate the pot clockwise the overdrive effect is blended in on top of your clean signal to give an almost amp-like response. This sensitivity is further reinforced with increased headroom courtesy of the voltage doubler, correcting a complaint that is common in many drive pedals. To further expand upon this elusive circuitry, MXR have added a Buffer/True Bypass switch to the side of the pedal so that no matter where in your signal chain you position the Sugar Drive, you can control how it behaves alongside your other pedals.

With a versatile range of tones that enhances a legendary circuit, the MXR Sugar Drive should be a staple of any pedalboard, big or small! 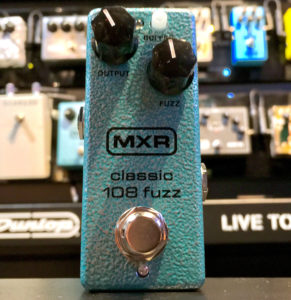 Now a staple in any silicon fuzz diet, the Classic 108 Fuzz has been shrunk into a bite-sized box to expand the new Mini MXR range whilst retaining the same great tone as its bigger brother. Using a BC-108 silicon transistor to give vintage voiced fuzz tones with a round and dirty crunch, it’s still just as easy to dial in the saturated and spitting tones we’ve come to know and love using the Output and Fuzz controls on the front of the pedal. Like its predecessor and the new Sugar Drive (see above), the Buffer switch means that your Classic 108 Fuzz Mini can play nice or misbehave with your other pedals as you please! 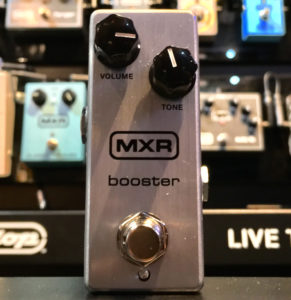 When legendary guitarists such as Jimmy Page and Eddie Van Halen have such an affinity for using the Echoplex Delay unit, even with the delay turned down, you know that the preamp circuit is the source of a musical secret sauce. Combining this with one of the world’s most highly-regarded boost circuits, the MXR Micro Amp, the MXR Booster Mini provides sonic synergy of the highest order in a lightweight space-saving mini housing. The controls on the top of the pedal allow you to fine-tune the Micro Amp side of the circuit, with the Volume knob providing up to +25dB of boost and the Tone knob rolling on or off the upper frequencies. The Echoplex Preamp level control can be adjusted internally, allowing you add a little extra grit to your tone. Whether you’re using it to push your amp harder, or just season your tone with the right flavours, the MXR Booster Mini supplies succulent sounds with a small footprint. 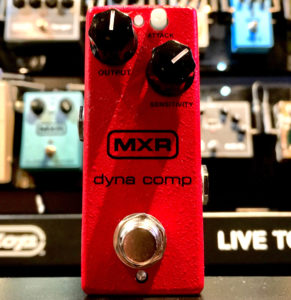 How do you make a classic compressor pedal like the Dyna Comp more pedalboard-friendly? Cut it in half. How do you make that half-sized pedal even better? Add an Attack switch that lets you flip-flop between slow and fast attack times, increasing the versatility of the pedal together with the Output and Sensitivity controls. Like the original pedal, the Dyna Comp Mini Compressor uses a rare CA3080 metal can integrated circuit to give increased dynamic range, greater transparency, and quieter operation, making it even more appealing to touring pedalboard users and studio musicians alike. 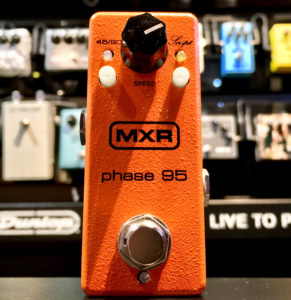 Probably the most versatile phase pedal for its size on the market, the MXR Phase 95 offers four variations of MXR phaser circuits in a small but mighty enclosure for both modern and vintage tones. The Phase 45/90 switch allows you to swap between two-stage and four-stage phasing to give more subtle or pronounced modulation, respectfully. The Script switch allows you to swap between more vintage (Script) and modern (non-Script) sounds. The modern phasing style uses feedback to create light harmonic distortion and exaggerate the ‘swoosh’ sound commonly associated with phase pedals. By activating the Script switch, this feedback is removed from the circuit to give a more subtle yet very warm and fluid sounding phase with increased headroom and clarity. As standard with all previous MXR Phase pedals, the Speed control adjusts the rate of oscillation, making the Phase 95 a Swiss army knife of modulation that will hold its own on any pedalboard.