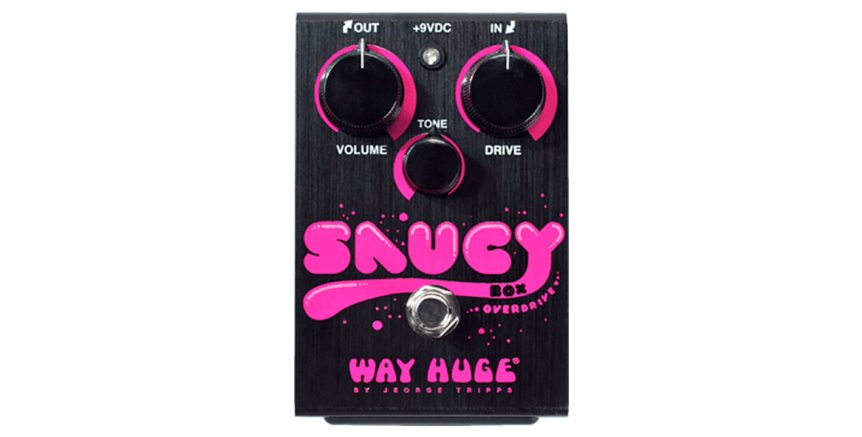 There are hundreds of pedal makers on the planet and there are plenty of pedals out there that are based on the legendary and controversial Klon pedal circuit.

Bill Finnegan designed the Klon and started selling them in the 90’s and since then his design has influenced a load of ‘Klones’ but that’s another story…..

Another pedal designer who has had a huge influence on the pedal world is Jeorge Tripps, who started building his pedals under the Way Huge name. He is the Go to guy for many noted guitar heroes and he has definitely been responsible for truly iconic stomp boxes.

A recent pedal by Way Huge is the Saucy Box which can lead you into that K**n territory…..

Many Way Huge pedals have been game changers in the pedal world and the Way Huge Pork Loin overdrive is one of them but now the Saucy Box can lead you into more overdrive heaven!!

It has 3 controls (Volume, Tone & Drive) and has the customary quirky Way Huge name and graphics. What it does really well is sounds amazing as a clean boost when you set the gain lower but what it also does really well when you turn the Drive control up is be one of the sweetest sounding overdrives around! Obviously you can tweak to your hearts content to get a variety of tone in between. The signal gets split in two where one runs through a preamp producing a slightly compressed and sweetened clean tone leaving the other through the overdrive circuit where it adds more dynamic drive with the bass frequencies cut a wee bit.

From a practical point of view, like all Way Huge pedals, the input/output jacks are at the top end of the pedal leaving more space on you pedal board and the battery compartment is not underneath but on the opposite end of the jack inputs allowing for a convenient and quick battery change.

If you put the whole K**n debate to one side, this pedal sounds amazing and is yet another product from the genius that is Mr Jeorge Tripps.

Here’s an overview video for the Saucy Box from the Jim Dunlop website..